For the first interview featured on the Sine FM Metal Zone blog, Demoniac had the pleasure of talking to Leeds based black / death metal band Sathamel, who are preparing to release their latest album Despair. A song from that will be played on Monday's Dark Side Of Metal show (on Monday 12th June) as well, and here's what Sathamel had to say... 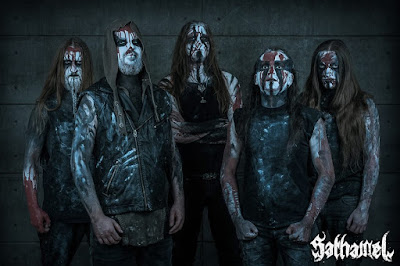 For the benefit of anybody who doesn't know who you are, can you first briefly introduce yourselves and describe your music?

We are a five-piece black/death metal band based in Leeds. The lineup is as follows:
Kruk - Vocals | KVN - Guitars | Aksahl - Guitars | Deimos - Bass | Valdr – Drums

How did you all meet and what made you decide to form Sathamel together?

We met at different points in time around the Leeds music scene. After previous bands ran their course we decided to form this band of a more extreme nature. The band was formed in 2013.

What is the meaning of the name Sathamel and why did you choose it?

Sathamel is a name at the time of choosing we felt an affinity with. Sathamel is a judgmental and protective figure relating to the "other side".

You released a self-titled EP a couple of years back, and are now set to release your debut album Despair. What can we expect from this album compared to the EP? In what ways will it differ, and what will remain the same?

We have continued with the variation of the material, much of it was written - in some form or another not long after the EP was released. The variation can be heard from our recently released two singles "Great Mass" and "The Evangelist". We're slowly expanding our sound but prefer to keep it natural at all times and not force anything.

What are the lyrical themes on the upcoming album?

The lyrics relate to different points of despair, death, ritual and "becoming".  The concept behind “Despair” is based very closely around our journey as a band. In our 4 years of activity we already have experienced many ups and downs. Most of these songs present a certain feeling I have had during the writing process, others are based on some situations that we have experienced personally. For example, “The Evangelist” is based on sacrifice, be it monetary or personal. “Human Sacrifice” talks about the need to remove a negative influence or person from your life. The title track – “Despair” – talks about a creative block or even depression which I have experienced once these emotions or negative situations overcame me and my psyche. It is through conviction and adversaries that this Despair was born. It also speaks to other members of Sathamel on personal level, for whatever meaning they associate with it. Therefore, the song “Despair” is the final touch and fitting conclusion for the album. Being the title track, this album will also remind us of all the adversaries we had to overcome to make it, hopefully paving the way to the next record.

Is any of your real-life outlook and world view reflected in your lyrics and if so in what ways?

I try to not touch on controversies while writing lyrics. When I do, (which happens very rarely) I make sure that the subject is well hidden within the lines so that it is not obvious to the reader. My views and opinions are not important to the music and I do not want to enforce my views through Sathamel.

I know you play live quite extensively, what can people expect from a Sathamel live show?

Our live show has been described as ritualistic. We adorn ourselves with blood, light incense and take to the stage. There is no way for me personally to describe this, it is a personal transformation and primal blur.

Where have been your favourite places to perform live? Any particular venues, festivals or other events you've enjoyed being a part of?

Incineration festival as that was the most recent springs to mind. We had not previously had such a professional crew of people to work with and such a great production at the Dome in Tufnell Park, London - our most prestigious show to date. Apart from this, York at the Fulford Arms has one of the craziest crowds we have had the pleasure of performing in front of, tied with the Unicorn in Camden.

Any particularly memorable moments from touring?

Supporting Tribulation and then performing at the Blackwood Gathering the following day. We were late to arrive at the Blackwood Gathering due to a fatal car crash just ahead of us, setting us back a few hours. When we finally arrived it was 10 minutes before our stage time with no preparation and total frustration we changed into our stage attire and played the set, this was then captured in tape format on Blackwood Productions.

What do you think have been the biggest challenges you've faced so far with Sathamel?

We have had lineup adjustments over the years. When the band first became Sathamel we had no bass player and when our previous guitar player called it quits at the end of last year we performed as a four piece once again. Lack of dedication of previous members was a challenge but something we do not suffer with now. Especially since welcoming Aksahl to the fold.

What has been the biggest highlight of the bands career so far?

Releasing the EP, our short tour with our friends Daemona and Trivax. Performing on stages with bands, that without their influence such as Belphegor, we probably would not be doing this in the first place.

After the release of this album, what's next for Sathamel?

We are booked to play the Quantic Club on the Rites of the Black Mass in Romania. This is our first overseas date with an incredible line up. Apart from this we shall see what the future holds.

I know you have members in both Leeds and Doncaster. How do you find the local scene in those places, and what is your relationship with it? How receptive would you say they are to a band like Sathamel?

Doncaster is a town we would not consider to have any sort of extreme metal scene, we are not involved in the live circuit and Sathamel has never been asked to play. The town to us is very much catering for the tribute band. We'd like to be proved wrong. Leeds on the other hand is a total hub for this kind of music and music in general, we performed our first show there and were embraced by the scene and it is a place we keep close to our hearts. We regularly rehearse in Leeds that is where the band is based.

Which other bands have most impressed you recently?

There's an absolute wealth of UK bands at the moment. Alongside ones we have mentioned previously I would say Repulsive, Necronautical, Eastern Front, Sidious and Ascaris.

Finally, once again thank you for doing this interview, do you have anything you'd like to add or say to readers of this interview?

Thank you for the interview. Thank you to everyone who has supported this band thus far. We are looking forward to presenting our new album "Despair". 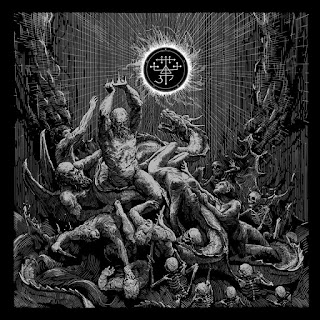