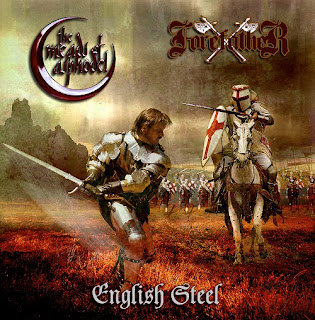 This was certainly a hugely anticipated release for me, and no doubt for many others, with the prospect of two quality bands from England’s underground collaborating to produce this split album. English Steel, as it’s titled, brings together Forefather and The Meads of Asphodel, with Forefather’s part of the offering consisting of seven new tracks while the Meads have contributed previously unavailable vinyl versions of the Taste the Divine Wrath tracks, along with a number of metal and punk covers.

One thing that’s noticeable from Forefather on this split is that the songs retain that classic Forefather spirit, as you’d expect, but the band have taken a more relaxed and freeform approach to the music on here and as a result we have an extremely diverse range of songs. There’s some really strong material here, “Two Sacred Oaks” being a particular highlight and standout track which is quintessential Forefather, rousing, spirited pagan metal with shades of black metal and a good balance between being heavy and melodic. The dual vocals, clean and growled, work their magic and contrast and complement each other well which enhances the overall vibe of Forefather’s music. “Strongbow’s Death” is another highlight with its folky guitar melodies and cements Forefather’s brand of Anglo-Saxon metal perfectly,


What’s noticeable on English Steel though, is Forefather have taken a few chances as well, and are playing around with a few ideas and doing things they’re less likely to do on a full album. For example, on songs like “One Blood and One Bone” there’s a nod to a more classic heavy metal style with a stronger emphasis on melodic leads, while on “Out of Time” they’ve softened and slowed things right down into almost ballad like levels. It’s an interesting yet good move, as it gives us something which is still Forefather at its core of course, but brings a few different ingredients to the table and shows the band stepping outside their comfort zone.

Coming to the Meads of Asphodel, who I still believe to be Britain’s most underrated metal band by a long shot, their side opens with a medieval folksy sounding intro before ripping into Chidiock Tichbourne, a vicious and frenzied song with the Meads usual unorthodox eccentricities scattered throughout. If you’ve not heard them before it’s as good an example as any of what the Meads of Asphodel do. What the Meads also do from time to time of course, is mess with heads and take the piss, as can be seen from the track which follows. “You’ve Got the Hate” is a Candi Staton cover with altered lyrics, it’s a fun parody of the original, and later in the album there’s an alternate version with Metatron on vocals.

You’ll also hear the Meads fascination with historical themes and religious brutality in the lyrics here, as “Balthasar Gerard” describes the regicide’s grisly end in a somber song with a dark atmospheric quality to it, while “Infidel” sees the Meads go into much more complex and experimental territory with a song that sounds like a crazy freestyle jam, with the band frequently changing pace, tempo and course with very different ingredients following one after the other. As for the covers, admittedly I’m not over familiar with the originals but you’ve got “Castleland”, originally by Desaster really standing out among these, listening to this it sounds like it could easily be the Meads own. There’s also “Perfect Day” and “Borstal Breakout” by The Saints and Sham 69 respectively which offer a nice blast of punk to finish off.

On the whole then, what we’ve got is two bands bringing very different ideas to the table and showcasing what they can do outside of the confines of full individual albums. If you’re a fan of both Forefather and the Meads Of Asphodel this won’t disappoint, there’s plenty to enjoy here and it should more than satisfy you until we hear more from these bands. If you know neither band then you’ve got a great introduction to two of England’s finest and I’d say especially, to those who know one band but not the other, that this is something you’d not want to pass up, the chance to be introduced to a great English band while hearing music from a more familiar one. Admittedly you’ll still find the bands’ best work on their albums and it’s worth exploring those albums if you like what you hear on English Steel, also if you’re a die-hard Meads fan and already have the Taste the Divine Wrath tracks you might be disappointed with the lack of new original material from them here. Those are minor points though, overall, you’ve got an excellent and cohesive split which should please fans of these two great English bands while hopefully grabbing them a few new ones along the way.