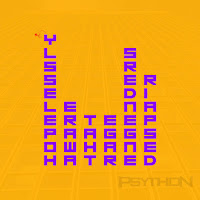 You may remember the interview done with Psython not too long ago on this site, and while it’d be fair to say that while Psython are a band who have been flying under people’s radar so far, they’re also a band which, when you notice them, you really take notice. Their last album Outputs was released last year and was very well received and rated by people who heard it, and this write up coincides with the release of their second album HATRED (Hopelessly Aware That Rage Engenders Despair). It’s been played on both the Dark Side of Metal and the Metal Mayhem shows on Sine FM and shows Psython once again channelling raw energy, passion and rage but this time in a much tighter and more focused manner. If you enjoyed the last album, this one takes what made that one good and takes it to the next level.

Opener “Jörmungandr”, there’s no two ways about it, is an absolute stormer, and is quite possibly the best thing I’ve heard from Psython yet. Fast, frantic yet distinctive riffs kick this one off and it’s not long before vocalist Bing Garcia tears into the fray, screaming his lungs out with a fury that I’ve not seen from too many people. The main thing you notice with Psython is these guys are full on intense, full throttle flat out balls out METAL going straight for the throat, and on top of this they can actually play to boot. It’s a lethal combination, there’s some outstanding musicianship going on here, each song packed full of killer riffs, frenzied solos and lots of little twists, turns and flourishes propelled forwards on a wave of raw passion and energy, and Psython really are at the top of their game on this.


It could be said that some songs on HATRED stand out more than others, which is the case to a point but it’d be more accurate to say that some songs take a couple of listens to fully appreciate while others deliver the payload immediately. The opener certainly sees the band playing an ace early on, songs such as “Battery Life” or “H.A.T.E.” take a no frills no nonsense approach too and will be an instant fix if they’re on your wavelength. You’ve then got songs such as “Chai Latte” or “Ten Pounds” which weren’t quite as impressive initially, at least not for me, then after a few listens you’re hearing things in them you didn’t notice before and you realise that there’s much more to these songs and the album than is immediately apparent. It adds depth to the album, I’ve played this a fair few times now and I’m still hearing new things each time, and expect to continue doing so. It’s worth mentioning the closing track, “Old Man”, a near ten minute slow and sludgy brooding epic that’s the polar opposite of pretty much everything you hear before, yet somehow seems the most fitting way to end this album.

Metal is a very diverse beast these days, something I hope is reflected on the shows we put out here at Sine FM. Amidst the many different subgenres and different paths the genre has taken over the years though, there’s bands which stay bang in the middle in the middle and get to the core essence of what made metal great to start with. Psython are one of those, they do everything you’d want a great metal band to do and if you like that raw, hard hitting no nonsense approach this one will hit the spot nicely. They’ve certainly impressed around this neck of the woods anyway, and the band describe their sound best themselves in the language of God’s own county. Reyt metal. Reyt?