If you've paid much attention to the Yorkshire scene at all, hopefully you will at some point have come across Psython. They're an up and coming band who bring a hard hitting adrenaline fueled sound and tear up the stage at their live shows with a ridiculous amount of passion and energy. They've shared the stage with bands such as Cattle Decapitation and Akercocke, they're also set to release a new album in September this year and I've been able to catch up with Bing, vocalist and frontman and get the lowdown. I didn't even have to pay him much for his closing comments either.....

For the benefit of anybody who might not be familiar with Psython, can you briefly introduce yourselves and describe your music?

We're a 5-piece Metal band - 2 guitars, bass drums, and a singer... we insist on being described as metal, cos that's what we do. We're fast in a thrashy sense, and some folk have said we've got a punky vibe too... but we're Metal.

How do you all know each other, and what made you decide to form Psython?

Psython started as the remnants of Septic Fatality; Luke and Will's old band. I knew Will from being in another band with him. We didn't really know Harry, but when we were gigging with our old drummer, we saw him play with his other band, Angry Grandad, and decided we needed to poach him. Eddie, I have known for years, from when he was playing in Nailstorm back in late 90s early 00s... an incredible guitarist, now giving the bass some hammer!

We all wanted to play Metal music… and therefore Psython.

Your debut album Outputs came out over a year ago, were you happy with the reception that album got? What were the most positive things to come from that, and with hindsight would you have done anything differently?

I think we were as happy as we could expect. From a standing start, we received some really cool reviews, loads of people played tracks on their blogs, podcasts and radio shows... all of which was really generous, and certainly the most positive thing about the reception; such kindness and enthusiasm from people who seem to genuinely enjoy music... very cool!

Not sure we would've done anything too differently...

I understand you have a new album coming out soon, can you tell us a little bit about this album? How will it sound in comparison to your debut?

Well... this album shouldn't be massively different. The first record was written with the aura of Septic Fatality and Thrash very much still glowing... this time round Will has had a bit more of a free rein. We've all kinda said that this record will be 'more interesting' than the first... plenty of speed in there, but a few other bits n pieces too...

Also - it should sound a bit more raw and engaging; we've got Harry's drumming on there. We used programmed drums on the first, cos we didn't have a drummer at the time!

How was the writing and recording process for this album?

Will did all the writing in, like, a month... he's fuckin' mental. He likes writing like that. It will probably change though, especially now we've got Eddie. We've all got loads of riffs and ideas knocking about, and now we've got a full band, we can start putting some elements together... we're already knocking things about for the 3rd album, so...

Recording was fine - nearly sent Will mad though. I love recording albums ourselves and I know we're really lucky to have someone like Will in the band who can do all that work. He might tell you that it's hellish (which I can believe), but it does mean that we can write, record and release an album far easier than if we had to pay for studio time!

What sort of themes will you be exploring with the lyrics on the new album? Who writes most of the lyrics, and to what extent are they based on your own views and life experience?

Well - as the front man, I handle all the lyrics, and they are all based on what goes on every day... I ask the rest of the band to name the songs and then I take my cues from the titles they come up with... I find it a quite interesting way of going about it...

I tend to stick to themes which are pretty standard fare for Metal; social alienation, anger and violence, drugs, shame in oneself, disgust at my fellow man... nothing that hasn't been covered before by anyone who put pen to paper, but I do like to think that it's not all drivel. I do like to take life seriously, and I'd hope that comes across...

You play live a fair bit, what have been your favourite experiences from your live shows, and which places and events have you enjoyed playing most?

Personally, my favourite experiences have been when we've managed to get a few shows all clumped up together as a kinda of 'tour' vibe... it's nice to hang out with the people who help you create this cathartic yelp of aggression night after night - kinda gives you that positive 'we can do it - fuck the world' feeling... illusory and ephemeral though it may be!

Also, it's nice to play for people who have been kind to us; we play metal, and folk have no reason to help us out - so when people dig it and remember us and chuck us a show, that's lovely.

No venue stands out above others, but there are so many 'Metal-friendly' venue, which we played last year, that have now closed, and every day brings news of another closure... a bit disheartening! 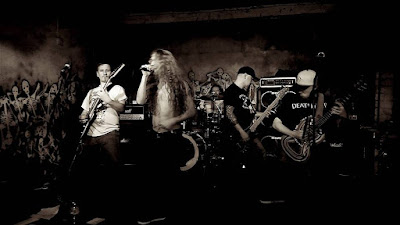 You've also played with a wide range of bands, including some big names over the past year or two, such as Cattle Decapitation and Akercocke. How do you find the experience of playing these bigger shows, and how does it compare to others? Which do you prefer to play?

Obviously we prefer to play the bigger shows... I mean, we play loads of shows to next to no one, which is fine; we know how it is. But when we get the chance to play with a 'big' band, it is a bit different; it's more of an event, more 'proper', more people and it does afford us the opportunity to enjoy a bit of the Rockstar vibe. We don't shift significantly more merch or owt like that, but, you know - it is nice to scream your tits off to a room full of people occasionally!

We haven’t really had any massive moments, plenty of welcome kindness though! Best moment would have to be hearing our songs recorded… writing and recording just never gets old! Biggest challenge would be that we just don’t seem to be what is 'cool' at the minute; we’d like to be playing better shows, to better ‘crowds’, but trying to get folk behind us has, and is, proving difficult…

You're from Yorkshire, how do you find the metal scene to be in Yorkshire, and are there any particular parts of Yorkshire you find to be particularly good for metal?

I dunno even know man! Perhaps if I was the Hot Band of The Hour I might have different ideas, but I think that because of the wider economic problems in the world, there just ain’t enough money in people’s pockets to build a scene that has much clout… I think most people in bands would concede that there aren’t enough people at shows… I don’t think that’s cos bands are shit… I think folk are skint!

Sheff seems to be doin’ well on the ‘Doom/Sludge’ front; that seems to be the dominant driving force for the S. Yorks scene as we experience it. But there are pockets of all sorts knocking about… Donny has a lovely wee scene, and Barnsley has a few really cool bands too… Rotherham sucks, which is the way it should be!

Which other bands are you listening to and particularly enjoying right now?

Mostly I just scope out the competition, and seethe with bitterness…

What would you say are the best, and worst aspects of the metal scene today?

The best aspect is that there is a scene at all; people still wanna play in bands and that is cool! Being in bands is good for you I think!!! Worst bit is, things just ain’t what it used to be… 15/20 years ago, if you wanted to check out some bands, or wanted to catch up on gossip, you had to physically go somewhere… now you can just check Facebook… I think that makes things worse…

What do you hope for the future with Psython, short term and long term, and where do you see yourselves in a few years from now?

We’ve never had unrealistic objectives for the Psython. We wanna keep writing and releasing records and playing all the shows we can. We’re all pretty interested in keeping the band together, playing gigs for the next 10 years. We can all play, and we have a mutual admiration for each other, and hopefully we can nurture these relationships! In 10 years we should have a good body of work to look back on, and shit load of fun to reminisce upon!

Finally, thank you once again for taking part, is there anything you'd like to add or say to people reading this interview?

Cheers for having us man… I hope that folk out there will be nice to each other, will fight the power and come to our shows… oh and buy our CD… ha!

And finally, dear Reader, please do keep supporting the Demoniac’s various activities; unlike me, he is no Philistine, no misanthrope and a true champion of underground metal, without the likes of which, shitty metal bands like mine couldn’t survive!