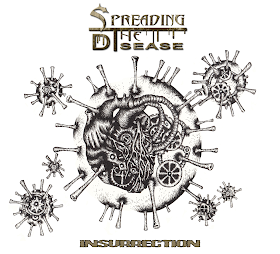 It’s been a while, but the Sine FM Metal Zone blog returns today with a look at the album Insurrection by Spreading The Disease. They’re from Kent, formed back in 2014 by bass player Steve Saunders. So far their output has consisted of the EP Viral, which received much critical acclaim, and now Insurrection, their debut full length album which came out last year. They describe themselves as a modern metal band, list bands such as Slipknot, Machine Head, Pantera and others as influences, and with Insurrection they certainly seem to have impressed a fair few people and made a decent impact.

There’s certainly no denying the passion these guys show here, the tracks here are bursting with rage and energy, there’s a hell of a lot to like about this band for sure. The heaviness is there, meaty riffs and grooves plough forward and bring a sense of fire and passion throughout Insurrection, you’ve got some fierce vocals too from Connor Russell Snyder, the yells and screams delivering the raw aggression and complemented by decent clean vocals interspersed throughout. If you’re a fan of modern metal you’re going to find Insurrection ticks all the boxes for sure, and certainly the younger metal audience are going to lap this up. It does everything you want it to on that front. However, the same can be said of a lot of bands in what is becoming an incredibly saturated scene and depending on your point of view to hear of a “modern metal” band listing the influences they do will typically evoke one of two reactions. Either chomping at the bit, or rolling your eyes in your head thinking jeez, not another. You could be forgiven for the latter of course, and you’d be pleasantly surprised when Spreading The Disease prove you wrong though, as they’ve delivered a strong debut with the raw aggression you want from a contemporary metal album yet showing enough maturity and diversity to impress all but the most jaded of cynics. 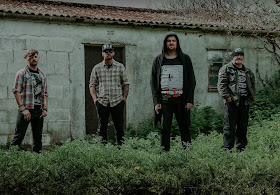 I think what I like most about this album is that they’ve drawn on so many different influences that come together to deliver their music the way that they do. They’ve got a very clear vision in how they want their music to sound, but they’ve got a fair few tricks up their sleeve in how they go about delivering that. Metalcore and hardcore fans will find much to enjoy, particularly in the early songs, opener “Find My Path” and “Words Unspoken” for example. You’ve also got a healthy dose of thrash showing through as well as punk spirit and influence showing through in a lot of the songs, both in the riffing and Connor’s vocal style at times on songs such as “Spreading the Disease” and “Greed” for example. The band do ease off the throttle on “Can’t Let Go” and we hear female vocals paving the way for a great solo which even gives nods to prog and doesn’t sound out of place, even a dash of funk on "Brexit Wounds" too. “Save me” has to be a real highlight of the album where Spreading The Disease really let rip and tear at you full force and I imagine it’s ferocious live too. Another highlight is “Whores of War”, clocking in at six and a half minutes but brings together so many of the strong points of this band in one song and serves as a good taste of what they can really do.

On the surface you’ve got a blisteringly intense full on metal album which holds its own on a crowded scene, but you’ve also got a band which can go much deeper and inject their music with a personality entirely of their own, and this becomes more apparent on repeated listens. If there’s any downside to this album I’d say it’s mainly down to the fact that there’s a lot of unrealised potential here. Spreading The Disease stretch far in many directions and are certainly ambitious. However, while I can’t quite put my finger on exact points there’s times where you think that they occasionally miss the mark or more accurately they sometimes fall short of what you really know they can do. That’s no bad thing, it leaves them somewhere to go, this is a debut album and as debuts go it’s an incredibly strong release, but I did occasionally get the impression that they’re trying a lot of different things here and some of it didn’t have the impact it could have. As I say, this is far from a negative point as it didn’t make me enjoy this album less so much as make me curious as to what we may hear from this band in the future.

In summary then, a great debut, and it’s worth checking Insurrection out if this sort of thing floats your boat, and even if not it’s one well worth giving a chance, you may be pleasantly surprised by Spreading The Disease. They’ve lit the fire here, I’m sure it will burn even more brightly in years to come.